Former FBI agent Anne McCormack knows all about family drama—she lands in the middle of it every time her fledgling estate sales business takes on a new client. This time her new client is Claire Murray, mother of a young boy whose murder, never solved, rocked their Wine Country town three decades before.

Now facing her own death, Claire still wants justice for her son. And she wants Anne and Anne's uncle Jack, a detective on the case in 1986, to deliver it. Jack is happily retired, and Anne's rocky exit from the FBI makes her wary of getting involved. Yet Anne feels a bond with the still-grieving mother, and Jack never really let the case go. So while Jack pulls strings to reopen the case, Anne follows leads from swanky hotels to a dicey trailer park, and finds plenty of suspects—including a school janitor and a troubled childhood friend of Claire's boozy youngest daughter Noreen. Even Noreen herself.

Anne overcomes personal troubles and Murray family intrigue to finally solve the case. But is it in time to stop another murder? 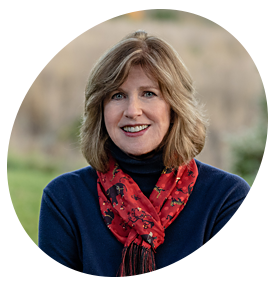 After studying at University of Portland, she worked as an advertising copywriter for various Northern California ad agencies before starting her own award-winning agency in Walnut Creek. Having run her agency for over twenty years, she now devotes herself full time to writing. When she isn’t writing or reading, Karin can be found hiking, home remodeling, planning trips, or binge watching Schitt’s Creek.

Karin lives in Santa Rosa, California, with her husband, and is currently at work on her second novel.

“I always want the audience to out-guess me, and then I double-cross them.”–Buster Keaton